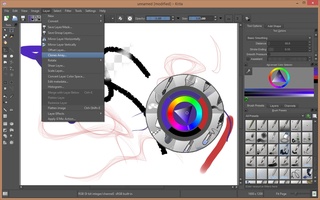 Advertisement
Krita is a program focused mainly on digital painting, although you can also use it to retouch photos or even edit vector images.

Initially made for Linux as part of the KDE and included in Calligra Suite, the first stable version for Windows was launched in May 2014 and offers all the power of the previous versions in a Windows environment.

The interface is influenced both by Adobe products and by digital drawing applications like Corel, so any Photoshop user can quickly familiarize him or herself with the program.

It includes a wide array of brushes and strokes, the ability to work with layers, support for the majority of the most common image formats, cropping, vector modification, color palette management, and various retouching assistants.

The best thing about Krita is that it's a free program under the GNU license. A more than worthy alternative to GIMP, the free image editor par excellence.
Reviewed by Andrés López
Advertisement

I really like this software, but several times I lost my drawing because it started over again. This is very demotivating and stressful, so, 1 star

Can Krita be Downloaded on Android Tablets?